The Sea Dogs, oddly, have not formerly announced that Greg Gilbert, who coached the Sea Dogs last season, will not return to the club. He's not listed on the team's website and Lalancette reported last week that Gilbert will no longer be the team's head coach.
Dwyer, 43, began his coaching career with the MHL's Summerside Western Capitals - a team the Sea Dogs have certainly had good luck with when it comes to coaching alumni. Dwyer was head coach of the PEI Rocket/Charlottetown Islanders for four seasons and most recently worked with the Shawinigan Cataractes.
Dwyer has also served as a head coach in the KHL for a few seasons and has coached several Hockey Canada teams.
As a player, Dwyer spent four seasons in the QMJHL before turning pro. He appeared in 108 career NHL games with the Tampa Bay Lightning, New York Rangers and Montreal Canadiens. He spent his last pro season in Sweden in 2008-09.
The move further solidifies Saint John's intentions for the upcoming season: they are all in. The Sea Dogs' playing style didn't change a ton under Gilbert, so it'll be interesting to see if this hire is the spark this group needs.
Posted by Jamie Tozer at 5:32 PM No comments:

CBC New Brunswick reported last week that the QMJHL "will require all its players and staff who are in contact with players to get both their shots before the puck drops."
Karl Jahnke, chief marketing officer for the league, confirmed that players who are not fully vaccinated will not be allowed to be play.
The move follows similar guidelines set by the OHL.
"So far we've had one player that won't be able to meet those guidelines," Sea Dogs president and general manager Trevor Georgie told CBC.
"We have one billet family that won't be able to meet the guidelines, and we have one staff member that may not be able to meet those guidelines. We have a few challenges, a few hurdles, but that's to be expected any time the league is mandating something like that."
Georgie noted an issue that's likely to impact a few teams - Belarusian forward Evgeny Sapelnikov, the team's second-round pick in this year's CHL Import Draft, does not have easy access to vaccines that are approved by the league (which are presumably the same vaccines approved by Health Canada).
BURBIDGE TO RHODE ISLAND
Forward Cole Burbidge, a second-round pick of the Sea Dogs in this year's QMJHL Entry Draft, will reportedly be joining the Mount Saint Charles Academy program in Rhode Island for the 2021-22 season.

Burbidge, a Windsor, NS native spent last season with the Mount Academy Saints program in PEI.
Joining Mount Saint Charles certainly increases the odds of Burbidge taking the NCAA route - but we'll see what happens this year and next. If he were to make the Sea Dogs this season he'd likely be near the bottom of Saint John's forward depth chart.
Simon Hughes attended Mount Saint Charles last season before joining the Sea Dogs.
REYNOLDS ONE OF THE BEST LEFT
Sea Dogs forward Peter Reynolds was listed as one of FCHockey's top undrafted players for the 2021 NHL Draft.
“I really believed that Peter Reynolds would get selected, and probably in the top 100,” FCHockey scout Viktor Bergman said in the article. “That surprised me the most."
Reynolds has since received a free agent invite to Columbus Blue Jackets camp.
CONTINUE READING THIS POST >>
Posted by Jamie Tozer at 4:47 PM No comments:

Greg Gilbert will not return as head coach of the Saint John Sea Dogs this season, reports Mikael Lalancette.

The announcement comes just a couple weeks before the start of training camp. Saint John's first pre-season game is set to take place Aug. 19.
Gilbert was named Sea Dogs head coach in June 2020 and led the team to a 15-14-3-1 record during the bizarre 2020-21 season. While the team showed glimpses of its potential, the Sea Dogs once again struggled to consistently play their best hockey.
The 59-year-old had previous head coaching experience in the NHL, AHL and OHL prior to coming to Saint John. He won three Stanley Cups as a player.
Posted by Jamie Tozer at 10:32 PM No comments:

Former Sea Dogs on the move

A couple former Saint John Sea Dogs are on the move.

On the opening day of NHL free agency, the Montreal Canadiens signed Mike Hoffman to a three-year contract worth an average annual value of $4.5 million.
Hoffman spent last season with the St. Louis Blues where he recorded 17 goals and 19 assists in 52 games. He added one goal in four playoff games.
This will be Hoffman's fourth NHL team after stints with the Blues, Florida Panthers and Ottawa Senators.
Hoffman played a season-and-a-half of junior hockey in nearby Drummondville. He spent the 2009-10 season with the Sea Dogs where he recorded 46 goals and 39 assists in 56 games as an overager, winning the QMJHL's most valuable player award.
Elsewhere, the Los Angeles Kings traded Bokondji Imama to the Arizona Coyotes last week in a deal that involved three other players.
Imama has yet to appear in an NHL game and has spent much of the past four seasons in the AHL with the Ontario Reign. There will certainly be more playing opportunities with the Coyotes given their lineup situation over the next few seasons.

Thank you Boko for being a leader on the ice and in the community for four years! Your influence and fights will be missed. pic.twitter.com/23BxIqoQIG

Imama, 24, spent parts of three seasons with the Sea Dogs, helping the club win the President Cup in 2017.
CONTINUE READING THIS POST >>
Posted by Jamie Tozer at 5:57 PM No comments:

Email ThisBlogThis!Share to TwitterShare to FacebookShare to Pinterest
Labels: Alumni

At least three Saint John Sea Dogs have been invited to NHL camps in the coming weeks.

The Sea Dogs announced earlier this week via social media that forward Brady Burns has been invited to Edmonton Oilers training camp; defenseman Charlie DesRoches has received an invite to Buffalo Sabres rookie camp; and forward Peter Reynolds will attend Columbus Blue Jackets training camp.
Reynolds was surprisingly not selected in last weekend's NHL Draft. Burns and DesRoches, meanwhile, have been eligible for each of the past two NHL Drafts.
Reynolds, playing in his first QMJHL season, registered 15 goals and 16 assists in 33 games. He also had a goal and three assists in six playoff games.
Burns registered 18 goals 20 assists in 32 games this past season. He added five goals and two helpers in five playoff contests.
DesRoches had four goals and 22 assists in 32 regular season games in 2020-21. He added four assists in five playoff matches.
Several Sea Dogs should be attending NHL rookie and/or training camps over the next couple months.
Jeremie Poirier (2020, 3rd round CGY), William Villeneuve (2020, 4th round TOR), Ryan Francis (2020, 5th round CGY), William Dufour (2020, 5th round NYI) and Cam MacDonald (2021, 5th round TBL) have all been drafted into the NHL while more could receive free agent invites.

Posted by Jamie Tozer at 8:50 PM No comments: 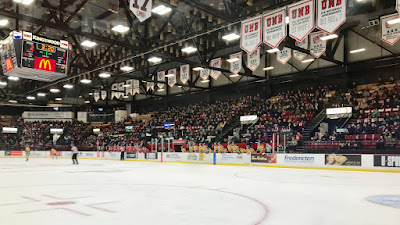 The Saint John Sea Dogs appear poised to play in the first Canadian major junior hockey game (pre-season - but it's something!) that will allow a full capacity crowd since March 2020.
The UNB Reds, who will host four Sea Dogs pre-season home games in August and September, announced Tuesday morning that the originally planned capacity restrictions have been removed. The announcement comes as the province is set to remove all provincial COVID-19 restrictions on Friday at midnight.
“Be prepared to have someone sitting beside you,” said Reds marketing and special events manager Nick Zildjan in an updated post on the athletics program's website. “That might be someone you don’t know, that hasn’t been part of your bubble or unit through the pandemic. We’re hoping the Aitken Centre is full for these games, and our Reds events in the days and weeks after.”

Originally, under soon-to-be updated COVID-19 protocols, UNB indicated that the Aitken Centre would operate at a reduced capacity for the August games, with a re-assessment to occur before the September games.
But with New Brunswick’s announcement of moving into the green phase of the province’s COVID-19 recovery plan on July 31st, the facility will be allowed to open every seat.
Masks will still be required when entering and moving throughout the Aitken Centre, and while in your seat, except while consuming food or beverages.
UNB is working to have concessions available.
Even in the green phase, ticket holders will be asked to respect physical distancing as much as they can while inside the facility.
Tickets will be sold for individual games. Four-game packages will also be available.

Tickets to all four games went on sale this morning.
CONTINUE READING THIS POST >>
Posted by Jamie Tozer at 12:54 PM No comments: