FINAL: Moncton 2, Saint John 5
FREDERICTON - Cole Burbidge led the Saint John Sea Dogs to a pre-season win over the Moncton Wildcats on Thursday at Fredericton's Aitken Centre.
Burbidge, a second-round pick in 2021 who likely has a roster spot already secured on this year's Sea Dogs team, recorded two goals and an assist to lead Saint John to a 5-2 win over their provincial rivals on the opening night of the Quebec Major Junior Hockey League's pre-season.

Ried Calder, a seventh-round pick of the Sea Dogs in this year's draft, had a goal and two assists playing on the top line with Burbidge and Eliott Simard. Vince Elie and Danny Akkouche also scored.
Quicy-Nicolas Supprien and Ben Mercer had Moncton goals. The Wildcats hit a couple posts in the final few minutes of the third but could not score another.
Justin Robinson started the game and stopped all 25 shots he faced in the Saint John crease. Charles-Antoine Girard played the second half of the contest, allowing two goals on 14 shots.
Moncton's Eli James allowed four goals on 16 shots in the first half of the game. Anthony Leblanc allowed a goal on 10 shots in the second half of the contest.
The two teams meet again on Friday night in Dieppe.
CONTINUE READING THIS POST >>
Posted by Jamie Tozer at 11:26 PM No comments: 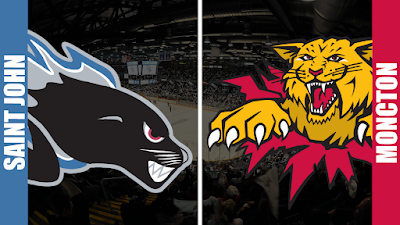 FREDERICTON - The Quebec Major Junior Hockey League pre-season begins tonight for the Saint John Sea Dogs.
The Sea Dogs host the Moncton Wildcats at 7 p.m. at Fredericton's Aitken Centre. It's the first of eight pre-season games for the Sea Dogs. All four of the team's home matches will be played at the Aitken Centre.
If it feels like just yesterday that the Sea Dogs were playing... well they sort of were. The team has had less than two months off since lifting the Memorial Cup on home ice on June 29.
This is the beginning of a rebuild for the Sea Dogs with much of last season's team either traded or moving on to professional hockey. But with so many roster spots available, it does make for an interesting training camp and pre-season. Saint John's exhibition contests should be fairly intense with so many players having legitimate shots of making the squad.
TV/Radio/Webcast: None/None/None
Pre-Season Records: This is the first game of the pre-season for both clubs.
2021-22 records: The Sea Dogs finished with a record of 47-17-1-3 for 98 points (second Maritimes/third Eastern/third QMJHL) while the Wildcats went 28-31-6-3 for 65 points (fifth Maritimes/seventh Eastern/12th QMJHL). Both teams were eliminated in the opening round of the QMJHL playoffs. Saint John went on to win the Memorial Cup as the host team.
CONTINUE READING THIS POST >>
Posted by Jamie Tozer at 12:00 PM No comments: 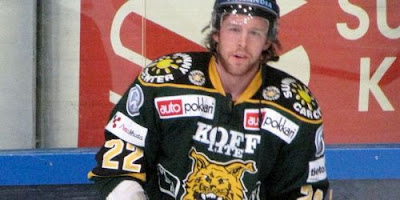 The Saint John Sea Dogs have hired Mark Lee as an assistant coach.

The news surfaced on Tuesday when the East Coast Blizzard, an under-18 team in Newfoundland that Lee had been the head coach of, tweeted the news. The Sea Dogs have not made an official announcement about the hire.

Massive Congratulations to our own Mark Lee! Mark has been named an Assistant Coach with the Memorial Cup Champion @SJSeaDogs! Wishing you all the best in NB, Mark!
The @NLU18MHL continues to be an amazing development path for both players and team staff. #NLProud pic.twitter.com/92xzprwKv6

Saltwire reports that Lee was offered the position on Saturday, arrived in Saint John on Sunday and was on the ice for the first day of training camp on Monday.
Lee and Sea Dogs head coach Travis Crickard are both Newfoundlanders. Saltwire reports that "at the recent Hockey NL high-performance program camp, where both are part of the province’s Canada Winter Games coaching staff, Crickard approached Lee about coming on board with the Sea Dogs."
The 37-year-old Lee spent one season as a player in the Quebec Major Junior Hockey League, recording 11 goals and 25 points in 65 games with the PEI Rocket in 2003-04. His junior career also saw him play with the Maritime Hockey League's Amherst Ramblers.
Lee has a lengthy resume of professional hockey play, suiting up in the AHL and ECHL along with stops in Denmark, Finland, Germany, Italy and Romania. His final season as a player came in 2018-19. According to Elite Prospects, Lee has been behind the the Blizzard bench since the 2019-20 season.
It sounds like Lee will be running Saint John's power play, which means the team's other assistant coach - assuming they hire a second - will presumably be focused on defensive play.

William Dufour and Team Canada will clash with Noah Patenaude, Vincent Despont and Team Switzerland in the quarterfinal round of the 2022 World Junior Hockey Championship.
Dufour and the Canadians defeated Finland 6-3 on Monday to earn top spot in Group A. Dufour, who had several quality scoring chances in the game, scored into an empty net late in the third period to secure a Canada victory.

The New York Islanders prospect now has two goals and three assists in four games.
Earlier on Monday, Patenaude made 20 saves to help the Swiss defeat Austria 3-2 and grab a spot in the quarterfinals. Despont only had 6:29 of ice time and recorded one shot on net.
Attilio Biasca of the Halifax Mooseheads scored with 4:07 remaining in the third period to give Switzerland the win.

POWERPLAY GOAL! Attilio Biasca connects on the rebound to give @SwissIceHockey a 3-2 lead with a few minutes to go!#WorldJuniors #SUIAUT pic.twitter.com/FcbcjP3SlP

Switzerland finished 1-3-0 in the preliminary round while Canada went 4-0-0-0. The Canadians will be the heavy favourites in Wednesday's quarterfinal match, which begins at 8 p.m.
The other quarterfinals have Finland facing Germany, Sweden taking on Latvia and the United States battling Czechia. The Latvians, who are without Sea Dogs forward Raivis Ansons, pulled off a surprising 5-2 win over Czechia on Sunday, which ultimately eliminated Slovakia.
The semifinals take place Friday and the medal games on Saturday.
Posted by Jamie Tozer at 5:35 PM No comments:

Here's a quick breakdown of the Saint John Sea Dogs' training camp roster, which was released on Monday morning.
The roster consists of 29 forwards, 16 defensemen and seven goaltenders.
Forwards

CONTINUE READING THIS POST >>
Posted by Jamie Tozer at 12:45 PM No comments: 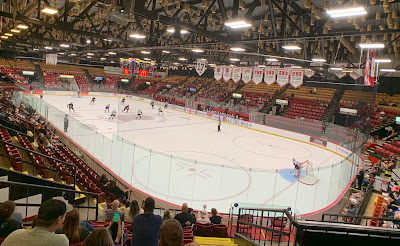 Somewhat legitimate hockey games return this week.
The Quebec Major Junior Hockey League begins pre-season play on Thursday, which includes the Saint John Sea Dogs hosting the Moncton Wildcats at Fredericton's Aitken Centre at 7 p.m.
The Sea Dogs and Wildcats meet again on Friday, travelling to Dieppe's UNIplex. The two teams met in Dieppe last season as well.
The following week, the Sea Dogs play a home-and-home with the Acadie-Bathurst Titan and then travel to Dartmouth to play the Halifax Mooseheads, which will be Saint John's final pre-season contest until Sept. 9.
The Sea Dogs will play eight pre-season games in total this year. All four of their home pre-season games will be played at the Aitken Centre. Tickets to the Fredericton games are on sale.

The Pre-Season is less than a week away! 🎉

All of our home games are being hosted by the @UNBAthletics at Coach Mac's home rink in Fredericton.

Grab your tickets at https://t.co/8cQKIqeDah now! We can't wait to see you there. pic.twitter.com/diQroUHuXK

Saint John begins regular season play on Sept. 24 at TD Station, hosting the Titan.
TRADES FINALIZED
The Sea Dogs have finalized a couple deals that took place during the holiday trade period.
Confirmed last Monday on the QMJHL website, the Moncton Wildcats have traded 2024 sixth-round (Saint John) and seventh-round (Val-d'Or) picks to the Sea Dogs in exchange for a second-round pick in 2025. The Sea Dogs also gave the Victoriaville Tigres a 2025 third-round pick in exchange for nothing.
This deals are presumably related to the Philippe Daoust and Nikolas Hurtubise trades made at the deadline.
CONTINUE READING THIS POST >>
Posted by Jamie Tozer at 5:11 PM No comments: