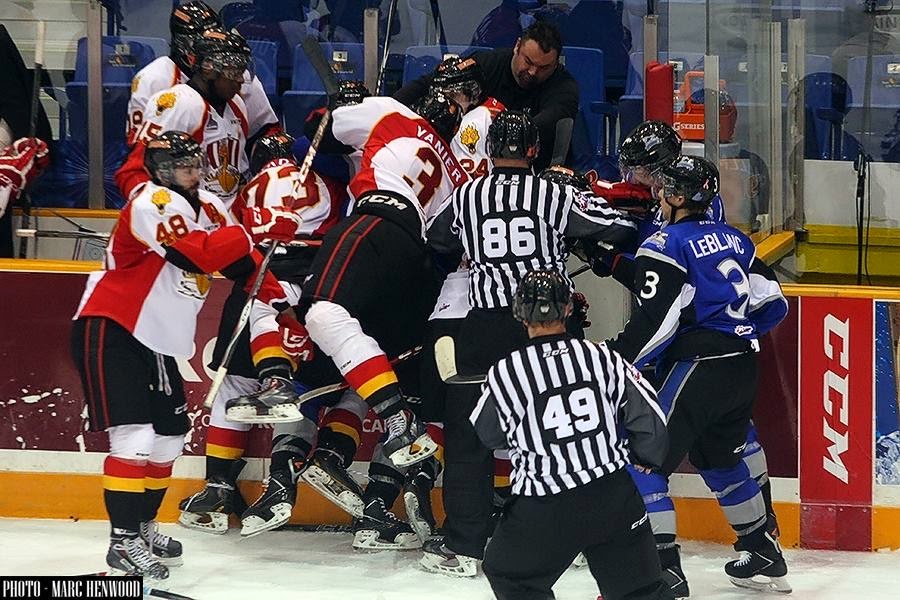 SAINT JOHN - The Baie-Comeau Drakkar (10-5-0-1) rode a six-game winning streak into Saint John but came away with a 6-2 loss to the Sea Dogs (9-3-0-2) at Harbour Station on Saturday evening. Nathan Noel, Mitch Dempsey, Sam Dove-McFalls, Mark Tremaine, Jakub Zboril and Justice Dundas scored for Saint John, while Bokondji Imama and Nicolas Meloche responded for Baie-Comeau. With the win, the Sea Dogs maintained their position at the top of the Maritimes Division.

Saint John got off to a quick start when Adam Marsh stole the puck just inside the Drakkar blue line, found Noel all alone in front with a nifty pass and tucked the puck between Philippe Cadorette's legs. However, less than two minutes later, Imama took advantage of a turnover in the Saint John zone to tie the score at 1-1. At 9:50, Dempsey took a feed from a rushing Olivier LeBlanc and fired a rocket to the top corner to make it 2-1. Less than two minutes later, the Sea Dogs extended their lead to 3-1, when Dove-McFalls completed a three-way passing play with Mathieu Joseph and Julien Tessier. But with 0:13.5 left in the first, Meloche's shot from the point bounced through a crowd and snuck through Sebastien Auger's equipment. Saint John led 3-2 after one and out shot the Drakkar 11-7.

The Sea Dogs pretty much controlled a penalty filled second period. At 4:12, Tremaine capped off a hard working shift with Dempsey and Dundas to extend the lead to 4-2. On a power play at 7:41, Zboril took a feed from Luke Green, skated to the high slot and ripped a wrist shot past Cadorette on the short side. And at 9:59, Dundas snapped the puck past the Drakkar keeper just as another Baie-Comeau penalty expired to make the score 6-2 ... and end the night for Cadorette. With under 4:00 left in the period, Drakkar defenceman Guillaume Beaudry received a major penalty and game misconduct for head-butting. The 6-2 score would hold up as the Sea Dogs also led on the shot clock 13-12.

The third period was relatively uneventful until all hell broke loose with 7:15 left in the period. During a line change, Valentin Zykov tried to pull Spencer Smallman into the Drakkar bench. Jack vanBoekel grabbed Zykov and a wrestling match ensued over the board. Then Alexis Vanier flew in, jumped onto vanBoekel's back and repeatedly punched the defenseless Sea Dog in the back of the head and kidneys. As a result, the Drakkar were shockingly awarded a two-minute power play while vanBoekel and Vanier were ejected for being aggressors and others on both teams were given 10-minute misconducts. During the final few minutes, both Imama and Nicolas LeBlond were also ejected for throwing punches at Sea Dogs after whistles. No more damage was done and Saint John held an 8-7 shot advantage in the third to end the game up 32-26 on the shot clock.

A full two-minute penalty kill at the start of the second period in which Auger made seven key saves, followed by Tremaine's goal at 4:12, set the Sea Dogs on the path to victory.

S.N. PLAYERS OF THE GAME
Mitch Dempsey provided both offence (1G and 2A) and a physical presence for the Sea Dogs. Both Olivier LeBlanc (now +19 on the season) and Adam Bateman were rocks on defence in front of Sebastien Auger. 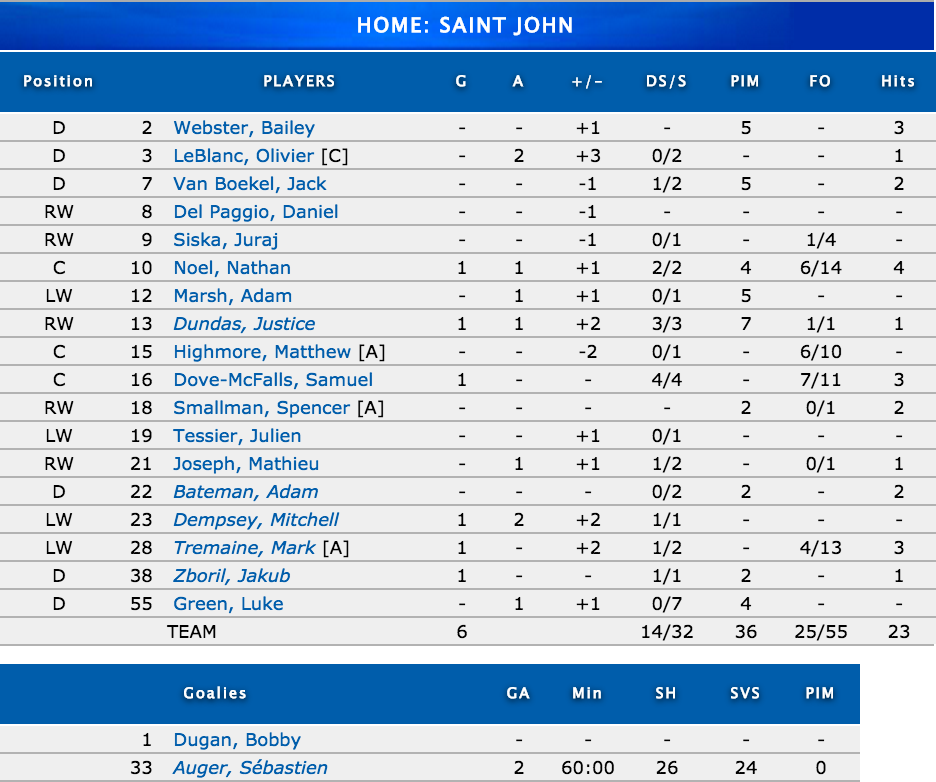 
Tomorrow afternoon at 3 p.m., former Sea Dogs Marcus Cuomo, Nicolas Hebert and Alex McQuaid return to Harbour Station with the Quebec Remparts to battle the Sea Dogs. This will be the Remparts only regular season visit to Saint John this season.